Give a home of any age a timeworn treatment with these terrific tips. 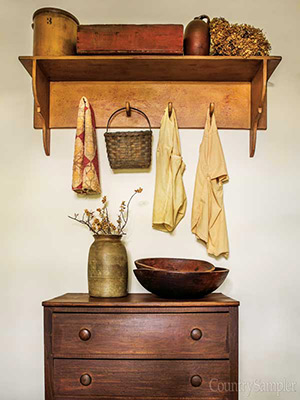 Janet and Ken Smith built their home on bucolic acreage in rural Indiana 25 years ago and, according to Janet, "I've been trying to make it look old ever since!" She certainly succeeded—and now you can benefit from some of her best ideas.

• Hide the outlets: Janet is a pro at strategically placing furniture and other primitive accessories in front of electrical outlets. In fact, she’s so good at it that her adult children often complain the house is short on outlets when their cell phones need charging.

• Get floored: The Smiths replaced carpet with wide-plank wood flooring in most of the house. They bought unfinished boards, and then Janet brushed on a mixture of two stains to get the color just right. Finally, she protected them with a topcoat of polyurethane. After doing the first room on her hands and knees, Janet switched to staining the wood before installation. "I got smart and did the boards in the garage on sawhorses," she says.

• Lighten the mood: Aside from a few overhead fixtures, there are no newer lights in Janet’s house, just electrified crocks, jugs and kerosene lamps. Janet converts the kerosene lamps herself: First, she buys an adapter from the hardware store that screws in where the wick normally goes, then she screws another adapter (from the craft store) into the first one so she can use a 3-watt silicone-dipped night-light bulb. Last, she dabs any shiny gold parts with burnt umber paint.

• Update the paint: The Smiths' kitchen cabinets were oak, typical for the home's time period, so Janet sanded the doors and painted them mustard. Then, she wiped on a little stain, distressed them, and applied polyurethane. Ken installed knobs he made by cutting the ends off of old clothespins. "It gives a Shaker look," Janet explains.

Get more old-time style by tea-staining your fabric accents: Visit Country Sampler on YouTube to view an instructional video.