Fruits of the Season

Learn how to craft fruity-themed displays that highlight the simplicity of Colonial country style. 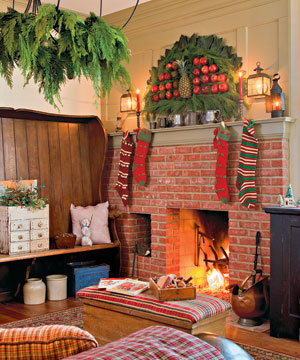 Although most view natural holiday decorations, especially those that incorporate fruit, as a custom dating from Colonial times, the practice actually has its origins in the early 20th century. According to the history section of the Colonial Williamsburg website, www.history.org/history, such decorations took hold in the 1900s, thanks in part to the growing fascination with Christmas and a focus on Colonial Revival styles. Still, it was Colonial Williamsburg that popularized many of the looks through their holiday decorations, especially "della Robbia" wreaths and fans that blend foliage with fruit and other natural items. That's where Pinckneyville, Illinois, homeowner Patti Wittenauer, whose house is featured in our November 2011 issue, found inspiration for many of her holiday accents, including the following:

Fruited Wall Fan: A semicircle of plywood studded with nails forms the base of this decoration found above the family room fireplace and the front door. Patti places a pineapple in the center and surrounds it with red apples, and then frames it with fresh greens and magnolia leaves.

Citrus Canopy: Patti uses fresh greens to fashion a fragrant canopy on the upper reaches of the master bedroom's tapered-post bed. By trimming the greenery with dried orange slices, the inventive homeowner adds a touch of color and sweet scent that subtly announces the season.

Fresh-Fruit Pyramid Centerpiece: Patti's husband, James, followed a pattern from a book to make a nail-studded cone on which Patti can affix pieces of fruit. She fills in with sprigs of greenery and tops it with a pineapple for a welcoming focal point on the dining room table.

Lemon-Studded Roping: Around her living room hearth, Patti brightens cedar roping by festooning it with clusters of fresh lemons and limes at the center and corners. Faux-lemon topiaries placed on each end of the mantel bring balance to the zesty arrangement.