The Country Sampler stylists employ nature-inspired items and rustic holiday decor to lend a home the air of an enchanted forest.

Transformation is part of the magic of Christmas. It's a chance to bring out cherished items and new acquisitions, to convert your home into a place of wonder and delight by incorporating a special theme that enhances your home and reflects your interests or a favorite setting.

Some themes are based around a color palette or a beloved collection, while others are inspired by a time or place. Country Sampler stylists René Haines and Carolynn Geesaman brought a woodland Christmas theme to life in the Fort Recovery, Ohio, home of Tammy and Tony Overton, drawing on the rustic appeal of their furnishings, many of them rescued and repurposed.

Since moving in three years ago, Tammy, who works as a painter and decorator, has spruced up many of the surfaces in the early-1900s home, from walls to furniture. She loves to refashion old items, especially architectural elements such as shutters, windows and doors. "We've made them into shelves, benches, headboards, and picture frames," she says.

One of her favorite pieces -- an old chalkboard -- was salvaged from the home's basement. It now hangs on the kitchen wall, where René used it as a backdrop for a cheerful, nature-infused vignette. "It's warm, inviting and earthy," René says of the appeal of a woodsy motif.

To see how René and Carolynn carried the look throughout other rooms in Tammy's home, read on for 18 inventive holiday decorating ideas. 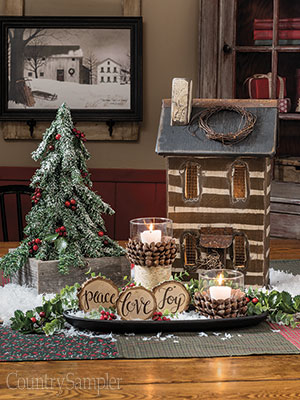 SNOWY SCENE
1. Cabin fever. Assemble a homey centerpiece with a variety of elements, including a tray of candles and sentimental wood slice ornaments, a frosted tree tucked in a wood box shelf and a lighted log cabin, all situated atop a patchwork runner and tied together with a dusting of faux snow.
2. All-pine glow. Craft custom candleholders by gluing several rows of pinecone scales around the base of a clear glass votive holder or tumbler. To add interest to the display, elevate one on a small birch log. "Texture, scent and light combine to appeal to multiple senses," René says.
3. Window framed. To create depth in a wall arrangement, layer a canvas print with a holiday scene atop a commonly found item, such as this salvaged window. 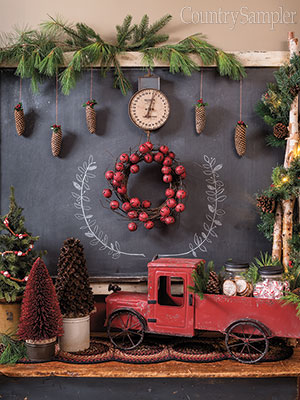 DRIVE-IN BEAUTY
4. Chalked up. A chalkboard allows you to easily embellish a scene, as René did by drawing laurel leaves to frame a wreath, and gives you the option to change it up throughout the season.
5. Tiny tree-o. "I really like grouping things by threes," René says of this trio, which includes a bottle-brush tree, a small faux pine sporting a cinnamon-stick and peppermint garland, and a tree made by gluing tiny pinecones to a polystyrene foam cone. Two of the trees are contained in crocks, the other in a small pail.
6. Peppermint pickup. Serve up treats in the bed of a toy or decorative pickup truck, stowing snacks such as cookies or candies in mason jars and tucking them in amid seasonal greens. Place a braided runner beneath the truck to provide a textured base.
7. It's a wrap. Add a twinkly touch to a display by wrapping two or three tall birch branches with lighted garland and leaning them along one side.
8. Frosty cones. Forage outdoors (or at the crafts store) for long, slender pinecones, such as those of the white pine, to make into ornaments. Top them with a few berries and sprigs of holly as well as a hanging loop of red string. If desired, dry brush the pinecones with white paint for a snow-capped effect.
9. Jingle belle. Suspend a unique wreath, like this bell-studded twig circlet, from a distinctive hook, such as a hanging scale, which is a decorative element in its own right. 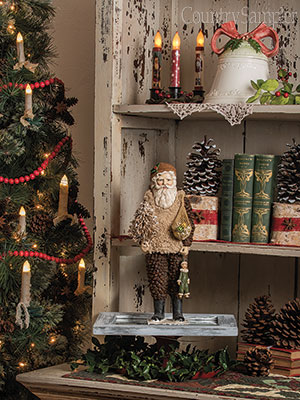 LITTLE ST. NICK
10. Stand-up Santa. Give a special decoration, such as this woodland Santa, a place of prominence by propping him on an upturned cake stand topped with a decorative mirror. Disguise the bottom of the stand with sprigs of fresh holly.
11. Starring role. "The tree is always a great starting point for a theme," Carolynn says. She went with a simple look, featuring beaded garland, clip-on candle lights and star-shaped ornaments crafted from pinecones and dried star anise (left), which imparts a spicy licorice scent as well as adding a rustic touch.
12. Bookish by nature. Build your own bookends by affixing large pinecones tipped in white paint to the tops of small segments of birch wood. Circle the wood with holiday ribbon and glue a dried star anise to the center of the ribbon. Pair the holiday hold-ups with red or green books.
13. Fabric festivities. Why not mix fabrics when decorating cabinet shelves? Carolynn used a patchwork runner on the bottom, red burlap in the center and a crocheted doily on top, where it sets off the thrift-shop cookie jar and battery-powered candle trio. 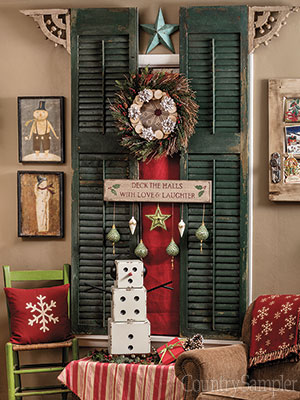 WINDOW TREAT
14. Wreathed in layers. Tuck berries and greens into a twig wreath and top it with a cardboard ring covered in wood discs and pinecone flowers. Secure the ring to the center of the twig wreath and place a decorative doily in the wreath opening.
15. Purely ornamental. Showcase heirloom ornaments, like these beauties that belonged to Tammy's grandmother, by suspending them from ribbons secured to the back of a seasonal sign. Add extra ornamentation to a window with shutters, decorative brackets and a tin star.
16. Red alert. Liven up the palette with a few dashes of red, such as a pillow, throw or curtain panel. Press a peppermint-stripe tree skirt into service as an impromptu cover for a trunk or table. "A few quick changes can make a room instantly feel more Christmassy," Carolynn notes.
17. Card trick. Vintage holiday postcards are still fairly inexpensive, especially those that have been written upon and postmarked. These colorful greetings are just the right size for filling picture frames or, as Carolynn did here, tucking into the framed openings of an old window mounted on the wall.
18. Snow wonders. Get a little flaky and include snow and snow-folk motifs amid your holiday fare -- a pillow, a figure, or a print or two lend a wintry touch that can remain on display for weeks after the last Christmas gift is unwrapped.
Decorate with Crafts