The colors and motifs of Independence Day inspire our Country Sampler stylist to blend perfectly patriotic touches into a kitchen and dining room.

Though they’ve spent nearly 42 years in their Bryant, Indiana, home, Freda and Neal Corwin are still fine-tuning it to fit their primitive country style.

Over the years, they’ve added a front porch, basement, garage, mudroom and more. When they moved in, the 1945-built house had been “modernized” with a 1970s look and they set about remedying that. For example, they replaced a drop ceiling in the dining room with corrugated tin and lined the room’s walls with board-and-batten. “We wanted to make it look old,” says Freda, an antiques aficionado who owns a primitive home decor shop, The General Store, in nearby Pennville.

More recently, the couple tore out the seldom-used kitchen breakfast bar to make room for an antique butcher block and icebox. They also covered the room’s navy print wallpaper with white shiplap, which, Freda says, “really brightened up the whole kitchen.” Freda, who has been collecting a wide variety of country goods for more than two decades, is especially drawn to blue and white enamelware, coffee grinders, pewter, and butter churns. She also likes to mix in cherished family pieces, such as her grandmother’s dining room cabinet.

She enjoys enhancing her displays with seasonal goods but admits she focuses her summer decorating efforts on the exterior. So, she was excited to see how Country Sampler stylist René Haines added all- American flair to her rooms. Keep reading to find out how you can incorporate some of her creative ideas into your own home! 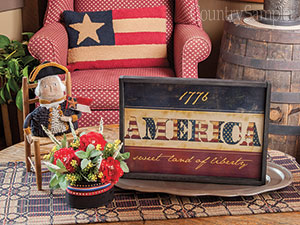 BY GEORGE!
René built a centerpiece grouping around a folk-art founding father, bringing in varied elements and textures to call attention to the whimsical figure.
• René set the stage with a Mount Vernon table runner, featuring a historic design and classic palette, and then arranged a pewter platter to serve up a patriotic 1776 sign that offers an aged appeal.
• Next, René perched a handmade wool George Washington figure atop a doll-size chair to lend it a bit more prominence in the display. In the background, a flag-inspired hooked pillow echoes the banner in the figure’s hand.
• To contribute extra color to the scene and continue the textile touch, René wired together shapes cut from red felt and red cotton polka-dot fabric to craft layered flowers. She nestled the blooms into a petite arrangement of faux florals in a black tin and then encircled the tin with coordinating patriotic ribbons. 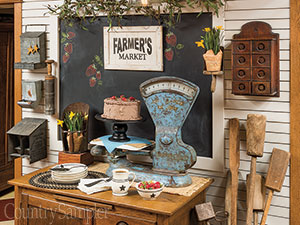 BOUNTIFULLY BEDECKED
The Corwins’ dining room is original to the home, but wood panels on the walls and tin on the ceiling were installed to give it a more rustic feel. Freda made punched-tin panels to fill in for missing doors on the cabinet, allowing her to incorporate the heirloom piece for showcasing her red transferware dishes and blue enamelware. René took her design cues from those prized collectibles when mixing in Fourth of July decor.
CENTRAL CASTING. A woven table square offers a graphic counterpoint to a simple linen cloth, forming the foundation for the tablescape, which includes chunky stars-and-stripes candleholders (see instructions on page 69) set atop a riser and accented with twig stars, Americana blocks and greenery. Pewter pieces bring luster to the arrangement.
STARRY SIGHTS. The Corwins installed the dark shutters to provide privacy because their home is located on a busy street. When open, the shutters call attention to the window decor, which includes a star-studded homespun valance, a large rustic wood star trimmed with a patriotic ribbon bow and a windowsill candle sporting a star-shaped bulb. The festive theme continues to the tan wall shelf beside the window, where a firecracker stacking block set and a red plate bring a burst of seasonal style to the everyday pewter display.
SIMPLY SWAGGY. To dress up the plain chandelier, René created a garland by stringing papier-mâché stars, beads, pieces cut from blue and red striped paper straws, and coordinating ribbon cut and folded to resemble flag shapes. She aged the straws with antiquing wax to blend with the other garland components. 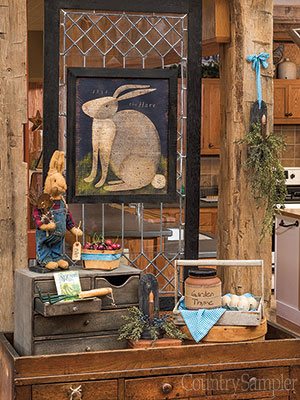 KITCHEN COZY
Taking out a breakfast bar they never used created space in the Corwins’ kitchen for an antique butcher block and an icebox that Freda uses as a pantry cupboard. Neal removed an old light fixture and replaced it with a distinctive piece he crafted from an old chicken feeder. Its linear shape is echoed by the shelf Freda constructed from salvaged wood and a pair of corbels.
René made full use of the timeworn surfaces, positioning a quilt-inspired decorative runner (see instructions on opposite page) on the butcher block, where it enhances the colors of the dishes as well as the enamel roasting pan in which she gathered glass milk bottles packed with posies.
The space atop the icebox, which is adorned with a tea-stained bunting, easily accommodates a burgundy-colored breadbox and coordinating Old Glory sign as well as a large candle lantern filled with plump fabric stars. On the room-brightening shiplap wall, a star-shaped clock picks up on the finish of the lantern and the other celestial motifs in the scene.
“Stars are not just a symbol associated with Fourth of July, but they are an everyday staple,” René observes, noting that many of the decorating elements she selected will endure well beyond the holiday festivities.