Pick up innovative hints for decorating with antiques and architectural salvage bearing strong shapes and designs. 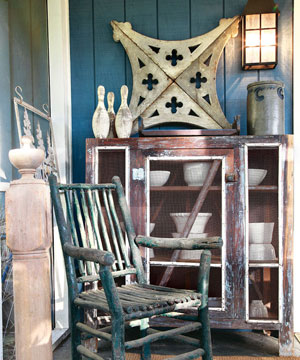 Antiques and architectural salvage provide inspiration to Strasburg, Virginia, homeowner Craig Morris, whose home is featured in our May 2013 issue. Craig is drawn to pieces with strong shapes and designs because they give a space a focal point, often serve as a conversation starter and create a truly personal environment. Take his advice and pick items or build displays with these traits:

Visual Diversity: Look for antiques and other decor that draw your eye with their motifs. "Game boards are great because they look folky and almost contemporary at the same time," Craig explains. Painted signs and patterned textiles bring personality to his kitchen and bedrooms.

Hometown Pride: What is your city or geographic area known for? In Strasburg, that would be high-grade stoneware and earthenware -- from 1880 to 1896, manufacturing stoneware was the chief occupation in the city. "Most homeowners in Strasburg today still like to have at least one piece of original pottery to tie back to the town's earlier history," Craig says. He has three local treasures, one of which is a crock perched atop a cabinet on the ham shack's screened-in porch.

Perfect Patterns: Don't shy away from choosing seating upholstered in graphic fabric. Strong pieces, such as the plaid armchairs flanking the fireplace in the ham shack, can work to tie an entire room's color scheme together or to spruce up an otherwise simple space. If you aren't ready to try out a big-impact motif on important furniture, such as chairs or a sofa, wade in on a smaller scale by selecting a patterned footstool or draping a coverlet over a leather ottoman, as Craig did in the ham shack.

Mass Appeal: When grouped together, even the smallest or most mundane items can make powerful design statements. One shoeshine box may not immediately draw one's eye, for instance, but Craig grouped more than 30 together in a wall of custom cubbies that are built around a small window in the ham shack. From bold red and green to more subdued blue, brown and white, the distinctive vintage boxes work together to give the space a dynamic focal point. The same is true of books stacked in colorful towers on the dining room/library table and yellowware tucked into a guest bedroom cabinet.